Brainfuck is a Discord-based interpreter for the esoteric programming language, brainfuck.

Brainfuck is an esoteric programming language created in 1993 by Urban Müller. The language contains only eight simple commands and an instruction pointer. While it is fully Turing-complete, it is not intended for practical use, but to challenge and amuse programmers.

. - Output the value of the current cell

, - Replace the value of the current cell with input

The brainfuck tape is made of an infinite (in this case limited to 30,000) collection of 1 byte cells. Each cell represents a single, unsigned 8-bit number. Cells start initialized at zero.

Since the numbers are unsigned, there is no need for any complex integer implementation. If the upper limit of the cell is reached, it wraps back to zero. If zero is decremented, it must wrap back to 11111111.

Tired of writing out characters over and over again? The bot’s unique shortcut system allows you to use special notation to drop chunks of code into your program. These can be uploaded by anyone and used by anyone. Run bf!help scripts to get started with building your own reusable code snippets. 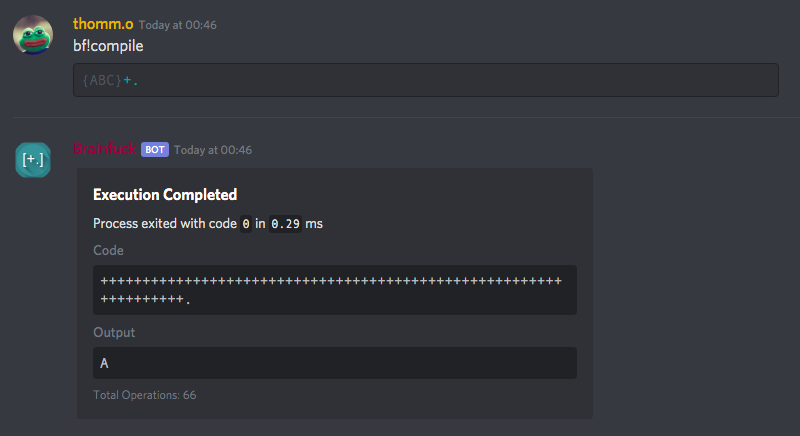 bf!compile [code] - Run the brainfuck code given in as the argument

bf!info - Show information about brainfuck and its syntax

bf!invite - Get an invite link for the bot